It is notable that the BBC has reported that patient charging and rationing of care may be needed in the NHS.
Patient charging in the NHS was always part of this Government’s plans. Lansley's NHS reform agenda clearly indicated that new patient charges could be introduced in the next parliament. It looks as though this may happen a bit earlier than planned.
This is all part of the wider NHS privatisation agenda and the grim financial situation the NHS finds itself will accelerate this process. Many NHS campaigners predicted that the number of core NHS services would diminish under the pressure of the £20billion NHS efficiency savings programme, known as QIPP or the Nicholson challenge. This will inevitably lead to increased waiting lists and a new market for healthcare insurance, co-payments and direct patient charges. The idea of the NHS providing a comprehensive service free to all is over. That is why Clause One of the Health and Social Care Bill was so important. The Secretary of State has now abolished his legal responsibility to provide this comprehensive service. Changing this clause was a key denationalisation and privatisation lever. That's what all the fuss was about in the debates. The door to private sector has not only been unlocked, it's been unhinged. As the public interest lawyer, Peter Roderick stated, “the Health and Social Care Bill provides legal basis for charging and a reduction in services”
The BMJ reported on this here.

As GP Clinical Commissioning Groups ration care, Foundation Trusts will see their income streams decline. This will be catalysed by competition with other providers who will enter the market through the Any Qualified Provider policy. Foundation Trusts will be forced to generate income by treating more private patients, facilitated by an increase of the private income cap to 49%. Many FTs will still fail financially and either close completely, merge with other FTs, or be taken over by private management.  The NHS hospital sector will therefore continue to shrink. Some care will go into the community and this is where more private takeover will occur, because private community providers will take on some of this work.
The privatisation process will also occur on the GP side. This is already happening in terms of clinical commissioning support services. However, privatisation of GP services is also occurring. The Any Qualified Provider policy is also coming to General Practice as well as the hospital sector.

This still has to be paid for. The private sector isn’t going to offer its services for free! Moreover, shareholders want to see profits to ensure reasonable returns. None of this will be affordable with current funding predictions for the NHS. This means money will need to increasingly come into the system from outside the State. This means insurance, co-pay and direct payment. This places financial risk directly onto the poorest and most vulnerable in society, who will be left will a minimal core service.  This is clearly the end of the NHS and it was clearly predicted. The public has been swindled out of their national health service.

What is really tragic about this is that the NHS is affordable in the long term. Professor John Appleby’s article in the BMJ was particularly enlightening on this topic. Moreover the NHS was founded at a time of huge national debt, far outstripping current levels. Current debt problems are a false argument for decreasing NHS funding. It will only result in personal debts going up as risk is transferred to the poorest. 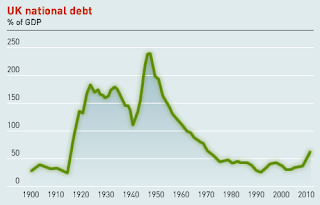 In addition Billions of pounds are also being wasted on a divisive market system and yet more billions of pounds that could be invested in the NHS are located in tax havens around the world. What we are seeing is an ideological political attack on the NHS and the welfare state.
In his recent article in the Guardian, Dr Gabriel Scally, who resigned as a DH regional Director of Public Health, got it spot on:
“Financial austerity is being used to dismantle the state”

This is a tragic state of affairs on the 64th birthday of the NHS.
Posted by Clive Peedell at 01:06