One of the main reasons for doing Bevan's Run is to raise public and professional awareness about how the Health and Social Care Bill will lead to increasing privatisation and commercialisation of the NHS, thus further undermining the founding principles of the NHS. The bill is close to being enacted (likely to happen at the end of March 2012) and the coalition nature of Government means that the Government has a majority in both Houses of Parliament. It therefore seems inevitable that this bill will become law, and campaigning and protesting may seem like a waste of time to many. However, I strongly believe that this bill is such a threat to the future of the NHS, that it is vital to continue to apply pressure to this Government through the democratic process. Public opposition to this bill from professional bodies and campaigners has already achieved a great deal including an unprecedented "pause" in the passage of the bill, and crucially a historical record that this bill was widely seen as flawed and a threat to the future of the NHS. However, despite some changes to the reform agenda following recommendations from the Future Forum, the key clauses in the bill that will result in further NHS privatisation and marketisation remain intact. The fight to defend the NHS must therefore continue and this must be focused on raising public awareness and public pressure on the Coalition partners. It is clear that any government that messes with the NHS (especially when recent evidence suggests it is more popular than ever and performing very well), will run into trouble and it is well known that David Cameron and Nick Clegg have serious concerns that these reforms will damage their respective parties as well as their personal political legacies.

Anuerin Bevan famously stated that the NHS:
“will last as long as there are folk left with the faith to fight for it”

That is why Bevan’s Run will be personally delivering a postcard from Bevan’s statute in Cardiff to Mr Cameron’s constituency office in Witney and Mr Lansley at the Department of Health in London, calling for the Bill to be withdrawn.

The postcard and text are below: 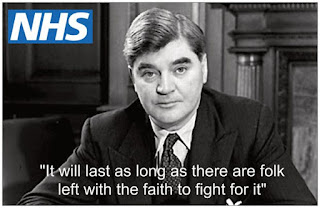 Dear Mr Cameron and Mr Lansley,
We write to ask that you withdraw the Health and Social Care Bill on the following grounds:
1. If enacted the bill will inevitably lead to increasing NHS privatisation and commercialisation, which will further undermine Bevan’s founding principles of the NHS.
2. The reforms lack democratic legitimacy. This is clearly a major top down reorganisation, with abolition of PCTs and SHAs and the creation of a regulated competitive external market, which will see an end to the NHS as a publicly funded and publicly provided healthcare system. This was not in your election manifesto, not in the coalition agreement, and not what the public voted for at the last General election.
3. The bill lacks professional support. The BMA and RCGP have both publicly called for the bill to be withdrawn, despite the fact that one of the key principles underpinning the reforms was supposed to be clinician empowerment, with GPs at the heart of the reforms. The message from the medical profession could not be clearer in that these reforms are seriously flawed and will be detrimental to the future of the NHS and patient care. Since there is strong evidence that clinical leadership and followership are fundamentally important to successful healthcare reform, this raises serious questions about your decision to plough on with the reforms in the face of such medical opposition.
4. The NHS is under unprecedented financial pressure and coupled with the £20billion QIPP efficiency savings agenda, massive reorganisation of the NHS at this time carries a high risk of service fragmentation and failure. There is evidence that some of the major changes that have already taken place on the ground are threatening service stability, even before the legislation has been enacted. The reforms will also drive up costs due to the increased bureaucracy and administration of the new healthcare market and the drive to turn patients into “consumers” of healthcare through the choice agenda.
5. Market driven healthcare systems erode professional values and the public service ethos, which is the glue that sticks the NHS together.
6. The NHS is one of the greatest achievements in modern British political history. Public satisfaction with the NHS is at an all time high according to the latest British Social Attitudes survey. The NHS is also one of the most highly performing and cost effective healthcare systems in the world, especially when it comes to equity and access to healthcare. The NHS logo has become one of the most powerful brands in the UK, carrying over 95% recognition among the general public, and very strong levels of credibility, authority and trust.
We accept the NHS is not perfect and also accept the need for continued evolutionary improvement and reform due to the changing healthcare needs of the aging population and advances in medical technology. However, the case for such massive change and reorganisation of the NHS as legislated by the Health and Social Care Bill has not been made. The bill is seriously flawed and should be withdrawn. In the words of the deputy Prime Minister, Nick Clegg: “No bill is better than a bad bill”.
We are certain that Anuerin Bevan, the founder of the NHS, would be appalled by this bill and we wanted to show our strength of opinion by personally delivering these postcards from his statue in Cardiff.
Yours sincerely,
“Bevan’s runners”
Dr Clive Peedell
Co-chair NHS Consultants’ Association
BMA Council and Political Board
Consultant Clinical Oncologist
Dr David Wilson
Consultant Clinical Oncologist
Posted by Clive Peedell at 10:23